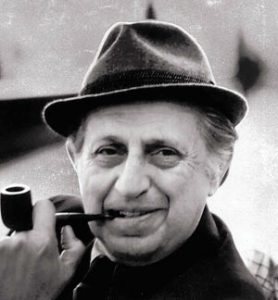 Leo Rosten, author of The Joys of Yiddish

I have a violent temper. It doesn’t explode very often, but when it does I have a surge of adrenalin so tidal that it results in a two-day hangover. One snowy day in New York I walked in the middle of the street because the sidewalk was blocked. Some son of a bitch driving a Cadillac behind me honked. There was no place for me to go. He honked again. I turned around and punched his expensive auto. I couldn’t dent it, but I punched it again.

On the other hand, sometimes I have patience and reasonableness when I should have indignation. Sometimes these virtues are a mask for cowardice.

I was mugged on a misty day. A very large black man accompanied by a nine-year-old apprentice stopped in front of the Sherry Lehman wine store on Madison Avenue. He was better dressed than I and I took for him for a stranger in town with his son.

I pointed to the other side of Madison Avenue.

He asked again, “Where’s West?” He was so tall I thought he might be talking about Jerry West, then a forward for the Los Angeles Lakers who were in town that day.

He had asked the question only to stop me and let some passersby go through. Once they were gone he said, “I want everything, or I will beat the shit out of you.”

My temper didn’t flair. My reasonableness may have been cowardice. He saw my watch and pointed at it. I gave it to him. He and the boy continued uptown at a more rapid pace.

I went home and called my friend and attorney, Thomas Ryan. He told me to go to the police precinct and report the mugging.

I did. I told them about the wallet and my watch, engraved with the CBS logo and my name. The police were friendly, and asked if I could identify the man from their mug book.

I tried. The identity images were blurred, particularly those of black men.

One of the cops said: “These aren’t photos. They’re just cheap Xerox copies. There’s not enough money in the budget to send real pictures to all the precincts in New York.

“WCBS TV could run a nice piece on the local news. Show a real photo and then show these miserable copies. Public service television. Budget cuts. Call your Mayor. Support the police.”

Senator Moynihan’s description of a conservative: “A conservative is a liberal who’s been mugged.”

Sevareid and I had done an hour interview with Moynihan before he had been elected. I had also met him when Luigi Barzini had me elected to a dining club chaired by Leo Rosten, an economist and the best-selling author of The Joys of Yiddish.

Leo called the group, “The Chaos Club” and he named himself, “The Board of Governor.” I was elected by Leo’s one vote to himself. The membership list was overwhelming, distinguished and conservative. It included Walter Wriston, the president of Citibank, Milton Friedman, Pat Moynihan and Alan Greenspan. However Leo had an inflexible rule. Any member elected to public office had to resign. His reasoning was that any politician had either to obscure or lie. So Moynihan and Greenspan had to leave.

Leo Rosten, author of The Joys of Yiddish,goodreads.com